EEGLAB now exist as a compiled binary for Mac, Windows and Ubuntu and may be downloaded on the EEGLAB download page. 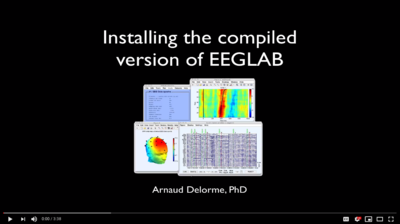 Similarity between the compiled and the Matlab version

What is not possible to do using the compiled version

Can I compile EEGLAB myself?

Compiling EEGLAB usually consist in opening the "eeglab.prj" file (in the root EEGLAB folder) using the Matlab Compiler Graphical App, then pressing the package button. However, there might be some path issue that require fixing on your system. This page contains notes we use to compile EEGLAB in our lab (it is relatively complex because we have automated nightly build for 3 operating systems).

How to check the integrity of the compiled version

Differences between the Matlab and the compiled EEGLAB version mostly arise because of the way external data files are handled. This is how we check the integrity of the compiled version (since it is not possible to automate this process yet).

If all of the above checks, then the compiled EEGLAB version is considered checked. We check the version separately on Windows and Unix/MacOS (Unix and MacOS are not checked independently since MacOS is a version of Unix).