Note: Use this page instead for Study Statistics and Visualization Options in EEGLAB versions 11.0.3.1 or earlier .

Computing statistics is essential to observation of group, session, and/or condition measure differences. EEGLAB allows users to use either parametric or non-parametric statistics to compute and estimate the reliability of these differences across conditions and/or groups. The same methods for statistical comparison apply both to component clusters and to groups of data channels (see following). Here, we will briefly review, for each mean measure (ERP, power spectrum, ERPS, ITC), how to compute differences accross the two conditions in a STUDY. At the end, we will show examples of more complex analyses involving 3 groups of subjects and 2 conditions. We will also briefly describe the characteristics of the function that performs the statistical computations, and discuss how to retrieve the p-values for further processing or publication.

EEGLAB allows performing classical parametric tests (paired t-test, unpaired t-test, ANOVA) on ERPs, power spectra, ERSPs, and ITCs. Below, we will use channel ERPs as an example, though in general we recommend that independent component ERPs and other measures be used instead. This is because no data features of interest are actually generated in the scalp, but rather in the brain itself, and under favorable circumstances independent component filtering allows isolation of the separate brain source activities, rather than their correlated mixtures recorded at the scalp electrodes.

For example, given 15 subjects' ERPs for two task or stimulus conditions, EEGLAB functions can perform a simple two-tailed paired t-test at each trial latency on the average ERPs from each subject. If there are different numbers of subjects in each condition, EEGLAB will use an unpaired t-test. If there are more than two STUDY conditions, EEGLAB will use ANOVA instead of a t-test. For mean power spectra, the p-values are computed at every frequency; for ERSP and ITC time/frequency transforms, p-values are computed at every time/frequency point. See the sub-section on component cluster measures below to understand how to perform statistical testing on component measures.

Now, if we repeatedly shuffle these values between the two condition (under the null hypothesis that there are no significant differences between them), and then average the shuffled values,

we then obtain a distribution of surrogate condition-mean ERP values dx constructed using the null hypothesis (see their smoothed histogram below). If we observe that the initial value d lies in the very tail of this surrogate value distribution, then the supposed null hypothesis (no difference between conditions) may be rejected as highly unlikely, and the observed condition difference may be said to be statistically valid or significant.

Note that the surrogate value distribution above can take any shape and does not need to be gaussian. In practice, we do not compute the mean condition ERP difference, but its t-value (the mean difference divided by the standard deviation of the difference and multiplied by the square root of the number of observations less one). The result is equivalent to using the mean difference. The advantage is that when we have more conditions, we can use the comparable ANOVA measure. Computing the probability density distribution of the t-test or ANOVA is only a "trick" to be able to obtain a difference measure across all subjects and conditions. It has nothing to do with relying on a parametric t-test or ANOVA model, which assume underlying gaussian value distributions. Note that only measures that are well-behaved (e.g., are not strongly non-linearly related) should be processed by this kind of non-parametric testing.

We suggest conculting a relevant statistics book for more details: An introduction to statistics written by one of us (AD) is available here. A good textbook on non-parametric statistics is the text book by Rand Wilcox, "Introduction to robust estimation and hypothesis testing", Elsevier, 2005.

Below we illustrate the use of these options on scalp channel ERPs, though they apply to all measures and are valid for both scalp channels and independent component (or other) source activity clusters.

Call again menu item Study > Plot channel measures. In the middle of the two list of channels, click on the STAT pushbutton. The following graphic interface pops up: 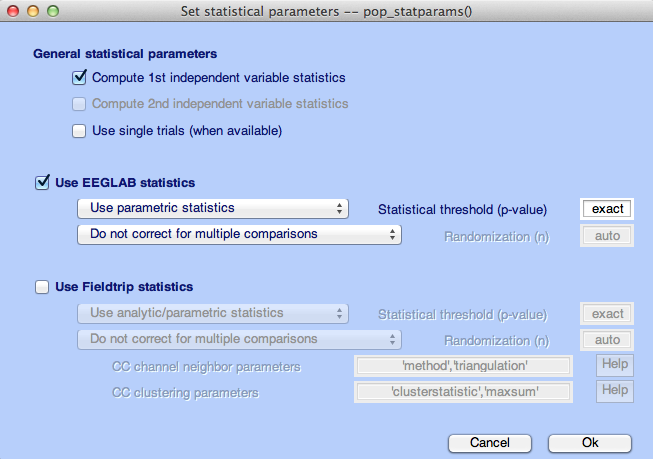 To set a threshold, call back the ERP parameter interface and set the entry in the Statistical threshold edit box to 0.01. 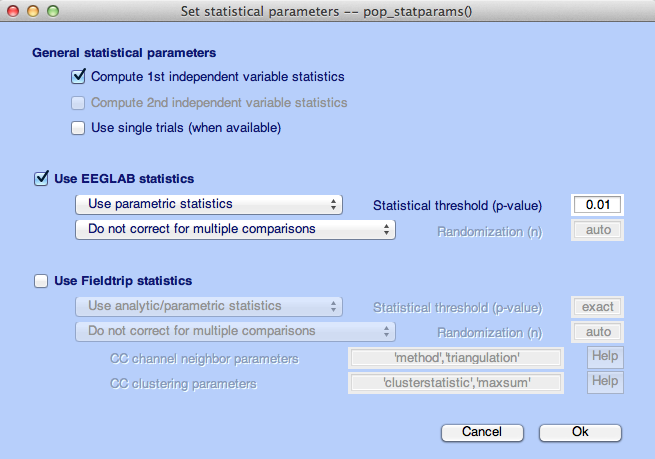 You may also click on the middle of the two Plot ERPs buttons on the Params button. In this interface, check the option Plot first variable on the panel as shown below. 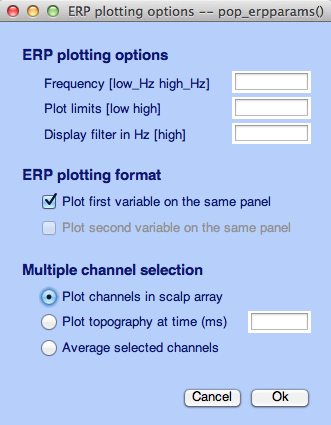 All of the plots above report parametric statistics. While parametric statistics might be adequate for exploring your data, it is better to use permutation-based statistics (see above) to plot final results. Call back the graphic interface and select Permutation as the type of statistics to use, as shown below. You may also correct for multiple comparison using False Discovery rate. 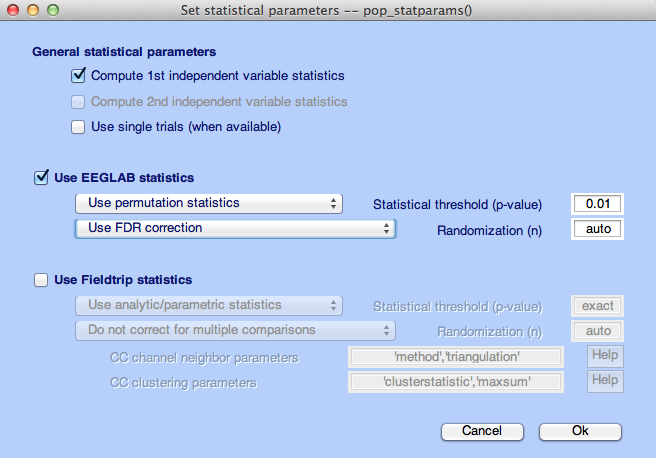 Below, we will use non-parametric statistics for all data channels. Click on the Sel. all pushbutton in the channel selection interface, and then push the Plot ERPs button. The shaded areas behind the ERPs indicate the regions of significance.

Finally, for data channels (but not for component clusters) an additional option is available to plot ERP scalp maps at specific latencies. Using the ERP parameter graphic interface once again, enter "200" as the epoch latency (in ms) to plot. 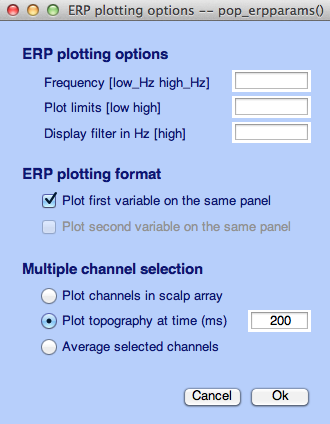 Select all channels (or a subset of channels) and press the Plot ERPs button. The following figure appears.

There are more options in Plotting Options gui we have not discussed -- they should be self-explantory. The Time range to plot edit box allows plotting a shorter time range than the full epoch. The Plot limits edit box allows setting fixed lower and upper limits to the plotted potentials. Finally the Display filter edit box allows entering a frequency (for instance 20 Hz) below which to filter the ERP. This is only applied for the ERP display and does not affect computation of the statistics. This option is useful when plotting noisy ERPs for single subjects.
Note that a command line function, std_envtopo.m, can also visualize cluster contributions to the grand mean ERP in one or two conditions, and to their difference. For more details refer this wiki description.

Options for computing statistics on and plotting results for spectrum, ITC and ERSP

The graphic interfaces for both power spectral and ERSP/ITC measures are similar to that used for ERPs and need not be described in detail. You may refer to the relevant function help messages for more detail. The same graphic interface is used by all measures to select options for computing statistics.

When performing a large number of statistical inferences, it is necessary to correct for multiple comparisons. For example, with a statistical threshold at p<0.05, by definition about 5% of the inferred significant values will be false positives.

There are several methods for correcting for multiple comparisons.

Two other methods are made available using statistics routines written for fieldtrip -- the max and cluster methods. The cluster method is now widely been used. As it is the least conservative of all correction for multiple comparison methods, it should be used with care. Note that EEGLAB allows users to apply the cluster method to clusters of raw data channels by automatically computing channel neighbor matrices -- though we consider this to be less accurate and informative, in most cases, than independent component clustering.

Computing statistics for studies with multiple groups and conditions

This functionality is still under development. Although we believe it is working properly, we are planning to update its graphic interface to make it more understandable. The current interface shows the ANOVA interaction term for groups and conditions along with marginal statistics. In a near-future release we are planning to have users select showing either the marginal statistics or the statistical main effects and interactions. Here we show a plot obtained from a clinical study on three patient groups of 16 subjects each in two experimental conditions (KAN, representing responses to the appearance of Kaniza triangles, and NONKAN, representing responses to the appearance of inverted Kaniza triangles; result courtesy of Rael Cahn). Selecting only condition statistics and plotting conditions on the same panel returns the figure below.