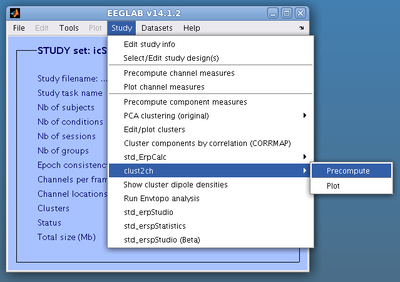 This is how GUI menu on EEGLAB STUDY looks. Precompute first, then plot.

If you specify the save path, the plugin will save the new .set files after rejecting ICs. The generated .set files can be used straight for SIFT and MPT.

Note that calculation of variance removes DC part of the selected window, which is fine for envtopo() PVAF because zero-sum assumption is guaranteed by average referencing. However, DC difference between contributor (IC ERP) and receiver (scalp channel ERP) is critical information in ERP (i.e., which P300 is larger!) To address this, using PPAF may be more optimal.

As an alternative measure, area under a curve (AUC) is implemented as well. AUC would be suitable for examining a time window around a broad peak/trough.

See also this page for further information about the older version called std_selectICsByCluster().